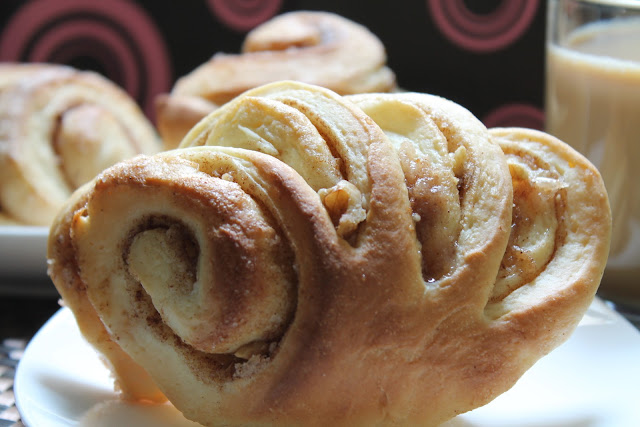 I don't really like buying cinnamon rolls at the bakery ....

It's either too cinnamony heh ! or too sweet! tsk tsk

Okay, I'm just saying that as I just baked my first cinnamon bread and it's really , really good ! lol

It has this nice balance of sweetness and a subtle cinnamon taste that won't overwhelmed your taste buds ....

I've been wanting to bake this bread since forever but I got a lot of recipes to choose from .....

Currently , I've bookmarked 3 recipes , I baked this first because I love the name ^___^''

And minimal kneading as well , er only 5 minutes of it ?! hee hee

I didn't even think of my KA mixer back home , getting dusty or worse , rusty tsk tsk , while kneading ! lol 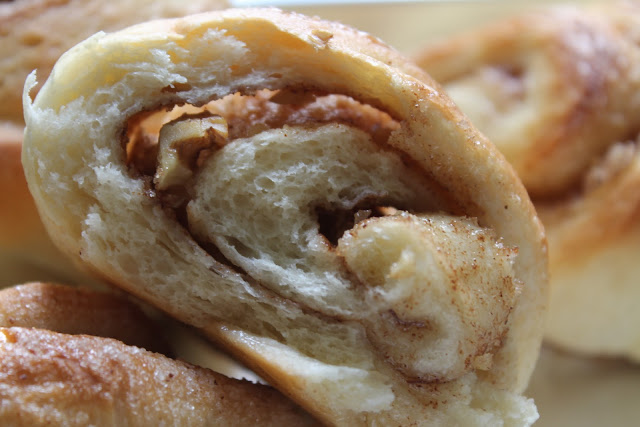 Recipe from Better Homes and Gardens

* Combine the sugar , walnuts and cinnamon , set aside for later use .

* In a large bowl , combine 1 1/4 cups of the flour and the yeast . Set aside .
* In a small saucepan , heat and stir the milk , sugar , butter and salt just until warm ( about 120 to 130°F ) and butter almost melts . Add the milk mixture to the flour mixture ; add egg . Beat with an electric mixer on low for 30 seconds , scraping the sides from time to time ; beat on high speed for 3 minutes more . Using a wooden spoon , stir in a much of the remaining flour as you can . ( At this time , I dumped in all the remaining flour , just added a sprinkle of extra flour to the dough while kneading as it was still a bit sticky )
* Turn dough in a lightly floured surface , knead in enough of the remaining flour to make a moderately soft dough that is smoother and elastic - 3-5 minutes total . Shape dough into a ball and place it in a lightly greased bowl , turning once to grease the surface . Cover and let rise in a warm place until double in size , about 1 to 1 1/2  hours .
* Grease baking sheet and set aside . Punch down dough and turn out in a lightly floured surface , cover and let rest for 10 minutes . Roll out dough into a 20-x-10-inch rectangle , brush with 2 tablespoon of butter and sprinkle evenly with the cinnamon/sugar/walnuts mixture ; starting from the long side , roll up the dough into spiral  , cut into 8 slices ; be careful not to cut all the way through, snip or cut each slice into quarter . Place slices seam sides down , 3 inches apart on the pan ; cover and let rise for another 30 or 45 minutes in a warm place until double in size .
* Preheat oven to 350°F/ 180°C . If desired , brush rolls with water and a sprinkle of sugar before baking .
* Bake for 12 to 15 or until golden brown . 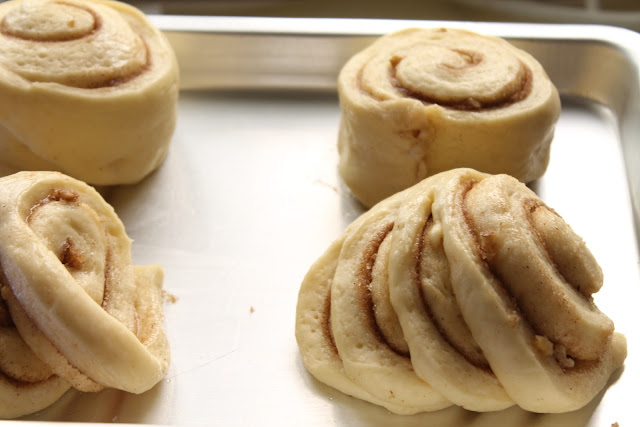