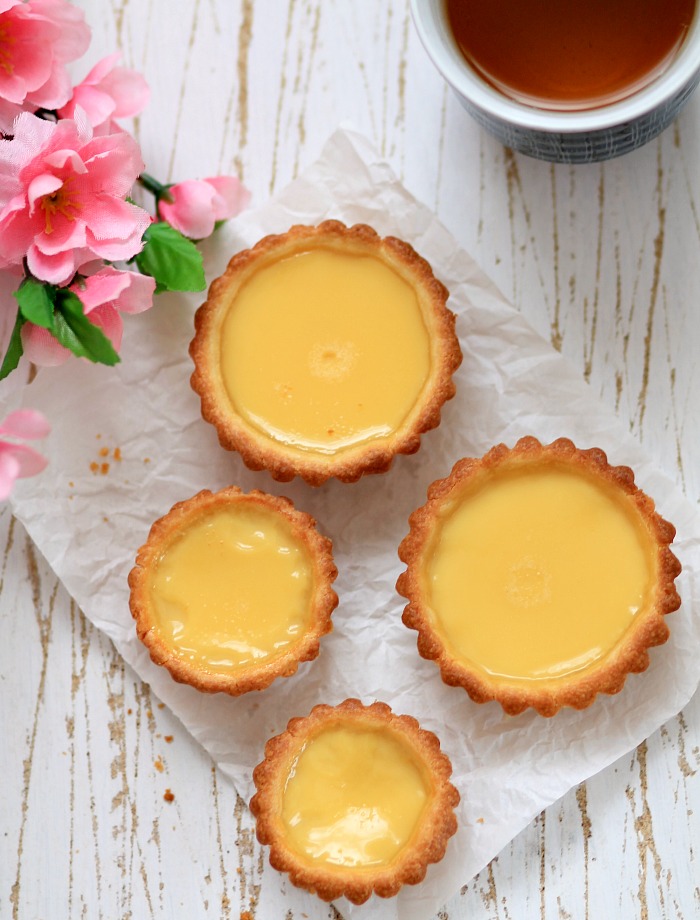 Walking around the streets of HK , you couldn't help but see these popular tea time treats in most local bakeries .

Egg tart or dan tat is a baked pastry filled with egg custard . There are two kind of crust , the shortcrust and puff pastry . But most egg tarts that I've eaten so far are made with sweet crust pastry , sort of like a shortbread but has a softer , melt-in-the-mouth texture . I don't like the puff pastry version of dan tat but I adore Potuguese egg tart , it's the caramelized topping that makes the difference , I think .

So where's the best egg tart in HK ? 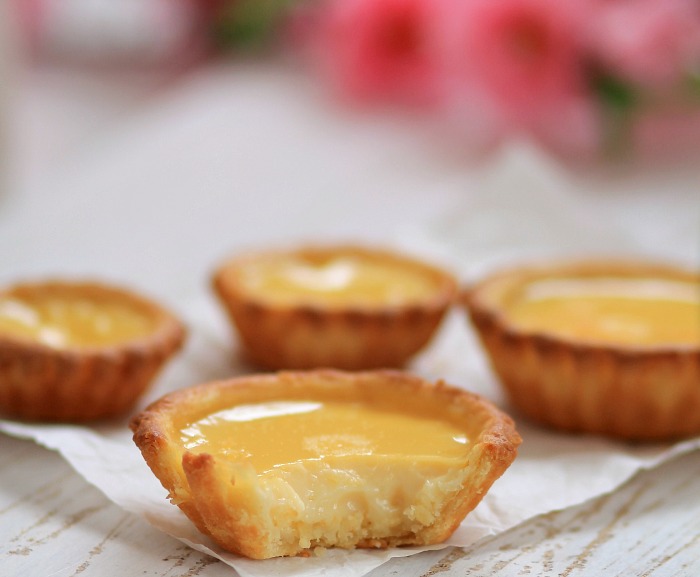 It's been more than 3 years since I've made my first egg tarts . The first was so disappointing , very thin crust but the small consolation is the smooth egg filling though it tasted bland .

I seldom bake tarts and this is my 3rd attempt , so far . Much as I love this kind of dessert , I still struggle to make the pastry crust , yeah , need more practice . Making the crust for this recipe alone takes me nearly an hour ! The dough is easy to handle but I had to roll the dough several times , got fed up , roll the dough again into a ball and from there , grab a portion and pressed it into each tin . By the time I was into my 5th tin , I found my rhythm lol 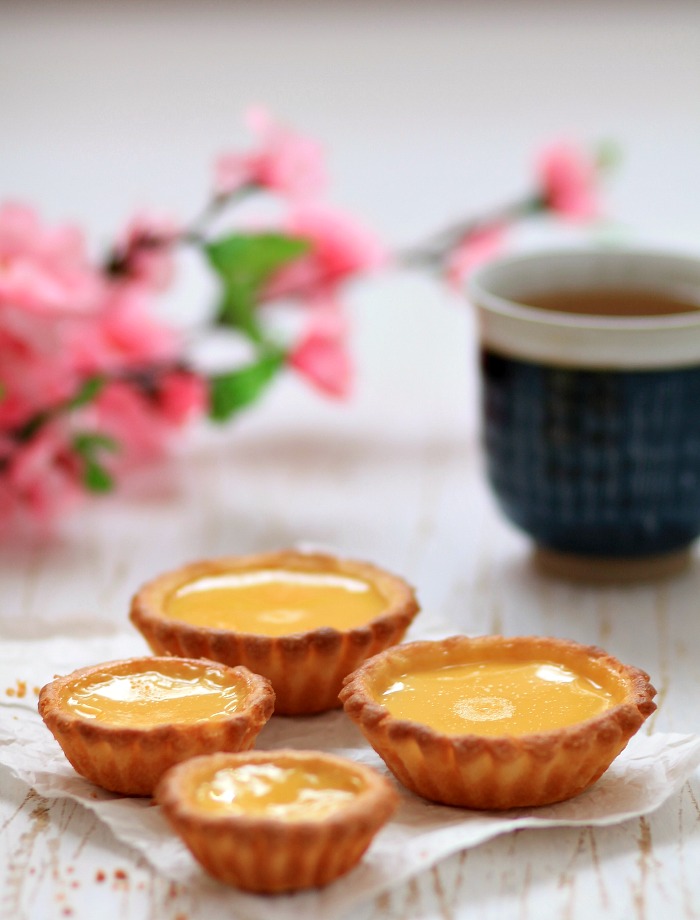 I used the recipe that I've found at Christine's Recipes book . Compare to the one in her blog , the ingredients of the custard/egg filling has a different amount . I've changed two ingredients of the pastry crust but used the egg filling recipe as is . It says in the book , the ( crust )  ingredients will make 16 tart shells and my modified pastry crust is enough for 8 tart tins , 3 square tins ( roughly the same size as the tart tins ) and 6 mini tins . The size of the tart tin listed in the book is too big , 1 1/2-inch deep is too much , mine is only 3/4-inch tsk ! The egg filling is not enough to fill all the pastry crust , I think the recipe of it in her blog is much more suitable .

I've seen the gorgeous tarts of Jeannie's / Baking Diary and I like the look of her crust . She used some condensed milk in pastry crust , so I decided to used condensed milk instead of sugar in this recipe . The result is soft , a bit crumbly melt-in-your-mouth pastry crust even if you manhandle the dough !

I'm not really happy with the color of some of the egg tart crust when I baked it yesterday , only 4 has this pretty golden brown crust . I think the oven is a bit off that day *sigh* Luckily , I still have 5 extra tart shells from previous day , so this morning , I made half of the egg filling recipe and this time I'm quiet satisfied with the color of all the crust .

The first 3 photos was taken today and the last 3 from previous day . 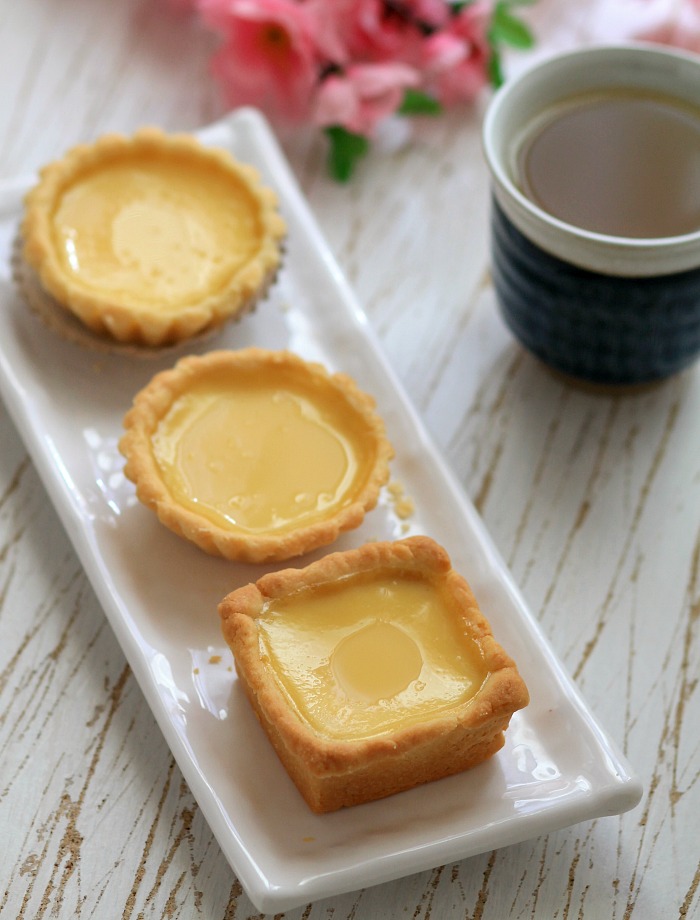 Recipe adapted from Easy Recipes : A Selection of Simple Classics

For the egg tart filling :

* Add sugar into hot water , stir until dissolved , let it cool down . Whisk eggs and evaporated milk together then  pour in the sugar water and add in vanilla , mix well . Strain mixture and set aside . 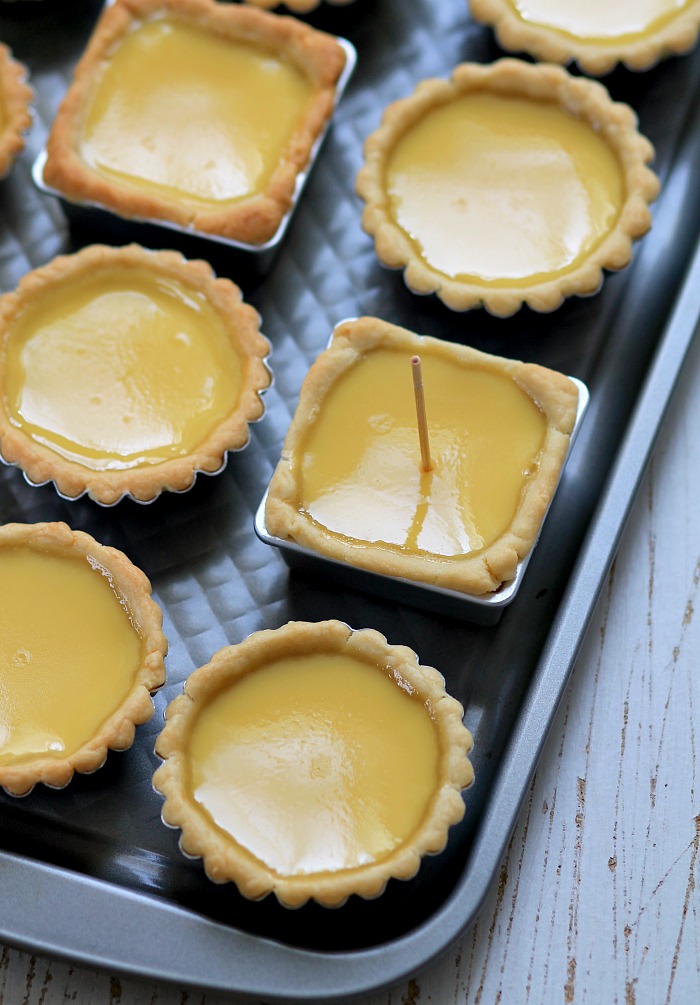 * Beat butter and sugar condensed milk , over medium-speed , until light and fluffy . Add the whisked egg in 2 additions egg yolk and beat over low speed , add in vanilla . Sift in the flours in 2 additions , scraping down sides of the bowl between each additions , until well combined . Knead dough  for few seconds .

* You can either roll out the dough and use the tart tin to cut it or get a portion and press dough into tin . Using your thumbs , starting from the bottom up to the sides , turn the tart tin in a clockwise or anti-clockwise motion in order to make an even tart shell . Trim away any excess dough . Repeat with the rest of the dough .

* Preheat oven to 200°C . Position rack into the lowest part of the oven .

* Pour filling into each tart shell . Bake tarts for 10 to 15 minutes . Reduced the temperature to 180°C and if the filling is puffing up , open the oven door ajar , about 2 to 3 inches . Continue baking for another 10 to 15 minutes until filling is set or when toothpick inserted in the middle of the tart stands on its own . 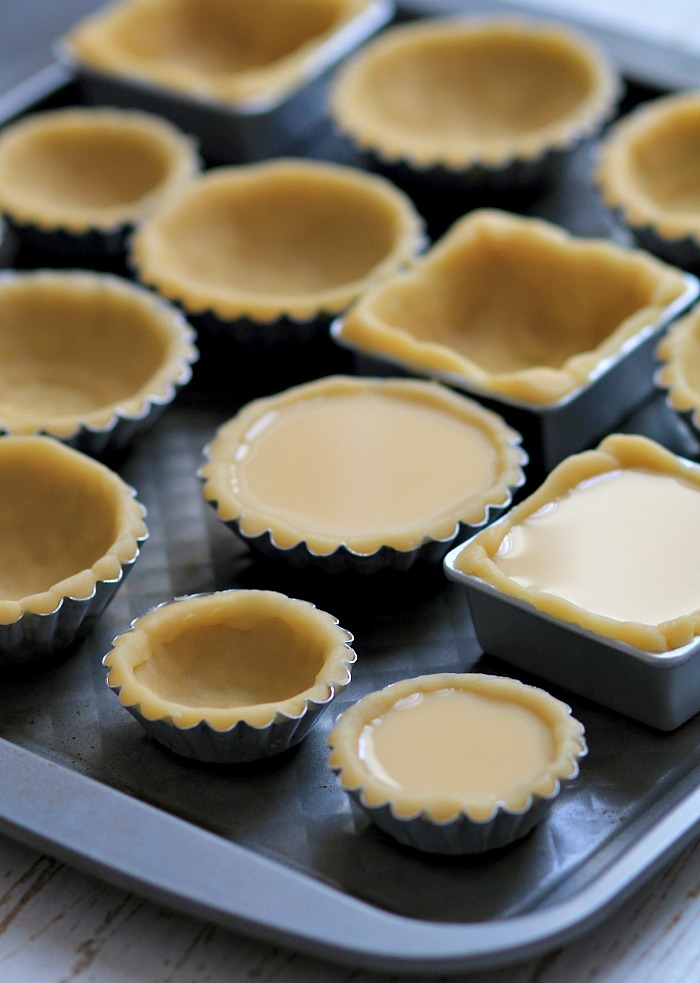