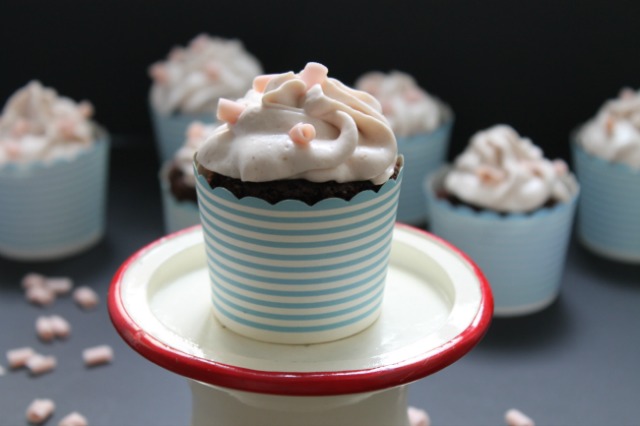 Good thing though that nobody's paying me to blog ( though wouldn't it be much better if there's some money involved , right ? hee hee ! ) or I'll be out of the job lol

But I'm craving for some chocolate cake and eating chocolates just won't do the job ....

So to kill two birds with one stone , bake then blog it , presto !

I'm not really fond of chocolate cake without chocolate listed as one of the ingredient , so most of the time when I see recipes that only list cocoa  , it's a no-go for me .....

It's my second time using her chocolate cake recipe and cocoa is the primary ingredient .

Most of you have baked Rose's cake and will agree that her recipes always deliver , just don't mind the looooong instructions  ^___^ ''

I've been meaning to join the Bake-Along blog hop event two months ago when the girls baked designer chocolate baby grands ( cupcakes ) but as usual there's this same ol' same ol excuse of mine .....

This time , I baked it ( sans the chocolate glaze ) , the frosting that I've used is the raspberry jam whipped cream , which in my opinion , easier to make with only two ingredients to whip and really go well with the utterly chocolaty and moist cupcakes . 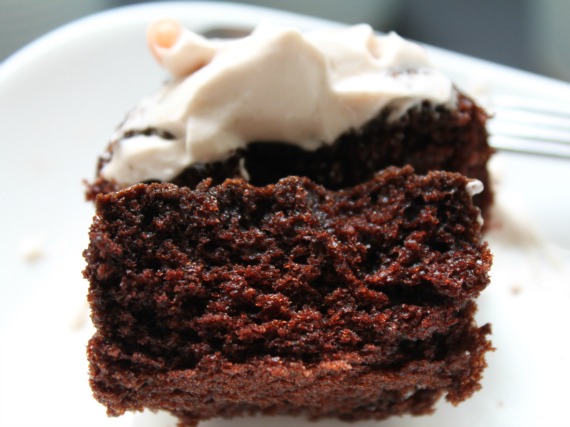 Have you baked any cakes from Rose's Heavenly Cakes book ?

* Prepare 14 foil cupcake liners ( I've used 18 1 3/4 x  1 1/2-inch liners ) , white liners still attached , coated with baking spray and flour , set in muffin pans .
* Twenty minutes or more before baking , preheat the oven to 350°F/175°C .
* In a large bowl , whisk the cocoa and boiling water until smooth . Cover with plastic wrap to prevent evaporation and let cool at room temperature , about 30 minutes .
* Add oil and yolks to the chocolate mixture . Starting on low speed , gradually raise speed to medium and beat for 1 minute or until smooth and shiny and resembling a buttercream . Scrape down the sides of the bowl ; beat in vanilla for few seconds .
* In a medium bowl , whisk together the flour , sugar , baking powder , baking soda and salt .
* Add half of the flour mixture to the chocolate mixture . Beat on low speed until dry ingredients are moistened . Scrape down sides of the bowl . Add remaining flour mixture . Raise the speed to medium-high and beat for a minute . Scrape down the sides and bottom of the bowl . The mixture will be very thick . Starting on low speed , add the egg whites . Gradually raise speed to medium-high and beat fro 2 minutes . The batter will now be like thick soup . Transfer mixture to a 2-cup or larger cup with spout . Pour batter into the prepared liners . They will just under half-full , 3/4-inch from the top .
* Bake for 15 to 20 minutes or until wire cake tester inserted in the centre comes out clean .

Makes about 4 cups ( I made half of the recipe )

* In a large mixing bowl , pour the cream and chill for at least 15 minutes ; chill the beater alongside the bowl .
* Starting on low speed , gradually raising the speed to medium-high as it thickens , whip the cream just until beater marks begin to show distinctly . Add the jam and whip just until stiff peaks form when the beater is raised . Use at once. 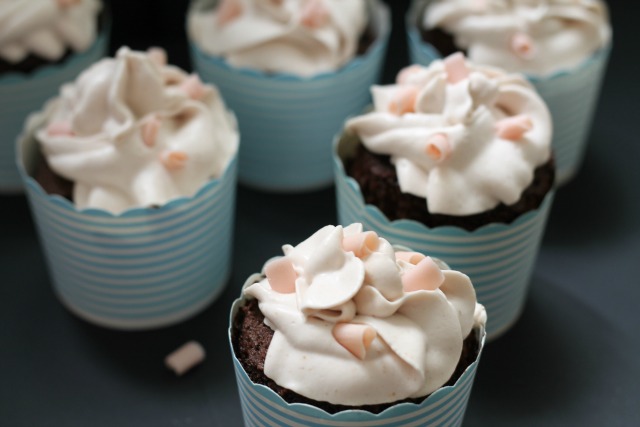